Making the documentation site multilingual is out of the box for dumi users.

For example, we wrote docs/index.md in English as the homepage of the site.

Now we want to increase the Chinese version of the site. Just create a Markdown file of the same name with the zh-CN locale suffix:

In the default configuration of dumi, en-US is the default language, and zh-CN is the second language.

If you need to modify this configuration, like modifying the default language or adding more languages, please check Configuration Items - locales.

The translation of documents is usually carried out gradually, and there is bound to be a transition period of 『document translation in half』.

To make this transition period more friendly, dumi will use the documents in the default language as the untranslated language documents, for example:

When a user visits www.example.com/zh-CN/missing, dumi will present the content of missing.md to the user.

In addition to independent component libraries, most of our projects will also have their own internal components.

It's usually troublesome to manage these internal component libraries.

There is no need to publish a separate npm package, but also need to be iterated, updated, Description, handover.

In order to make the management of the project's internal component library easier, dumi launched the Umi project integration mode:

The usage is very simple:

Install @umijs/preset-dumi in the existing Umi project into devDependencies, and then configure resolve.includes as needed (for example, the src/components directory usually conventional defined as business component libraries and the documents corresponding to libraries).

How to understand assets meta data? From the developer's perspective, in a narrow sense, any entity that can be produced to help downstream improve efficiency can be called an asset, such as components, documents, component APIs, component demos & etc.

In the process of component development, we create assets all the time. The released npm package is naturally an asset, and the written TypeScript type definitions and carefully prepared component library demos are also assets. Now only one command is needed to digitize the assets completed by dumi and the developer. This data can Follow the npm package iteration, release, and then transfer to downstream tools.

We select Umi UI for example, the usage process is shown in the figure below: 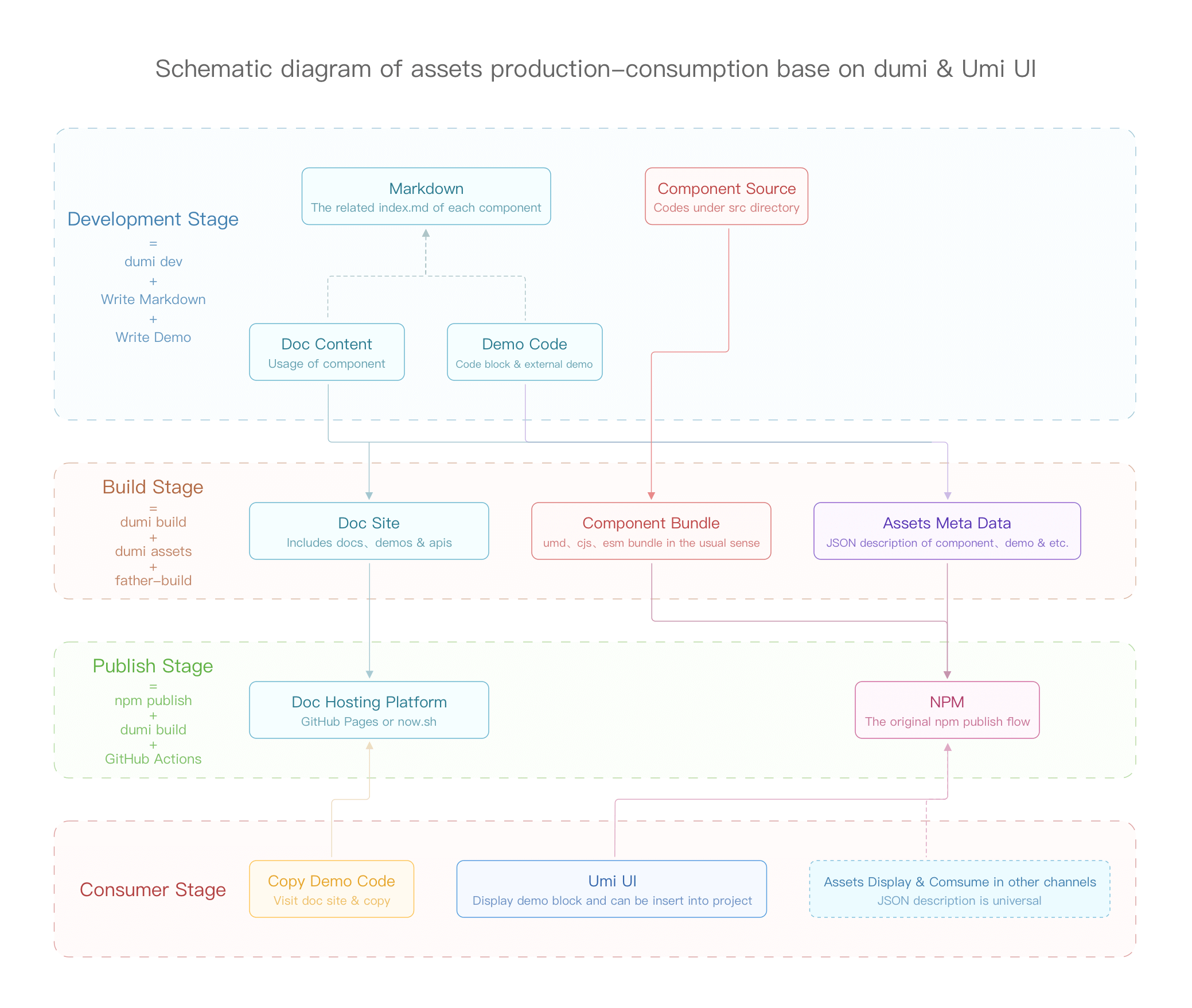 Take the demo of the initial project as an example, open src/Foo/index.md and add the following frontmatter configuration:

In addition to writing frontmatter in the source code, adding attributes to the code tag of the external demo can also add meta-information:

Add an npm script to package.json and declare the dumiAssets field. Umi UI will find asset metadata files based on this field:

Since assets.json does not need to participate in version control, please add assets.json to gitignore.

If it's just for testing, you can use npm version instead of npm publish, and then use link for local play:

Initialize the Umi application, install Umi UI and link the component library we just made:

In the package.json of the Umi application, manually add the component library as a dependency:

Then start the Umi project as usual, you can see the demo assets in the dumi-lib project in the mini bubble of Umi UI, and can be directly inserted into the page for use: 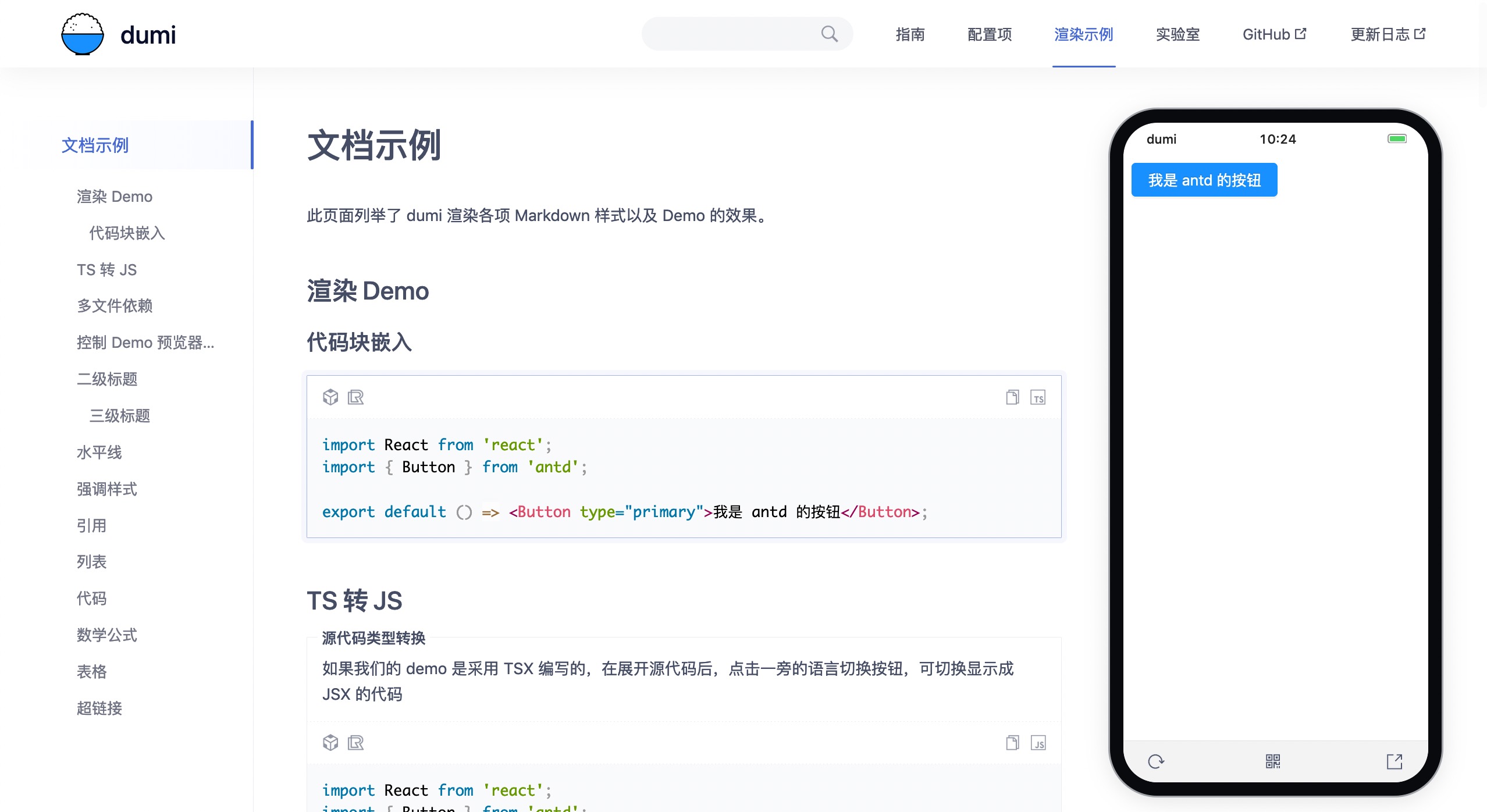 Visit Theme List - mobile to learn more about the features and HD solutions of mobile themes.

The premise of automatic component API generation is to ensure that dumi can deduce the content of the API through TypeScript type definition + annotations, such as the source code of the Hello component:

The type analysis tool dumi based is react-docgen-typescript.

For more types and annotation usage, please refer to documentation.

Show the API in the documentation

With the source code that can derive the API, we can render the API table through the built-in components of API in Markdown:

The effect is roughly as follows:

Like other built-in components, the API component also supports override through the theme API.

You only need to create a .dumi/theme/builtins/API.tsx (local theme) or create a theme package containing API.tsx, combining with the useApiData hook exposed by dumi/theme, you can control the rendering of the API table yourself.

Please refer to the API component implementation of the dumi default theme.